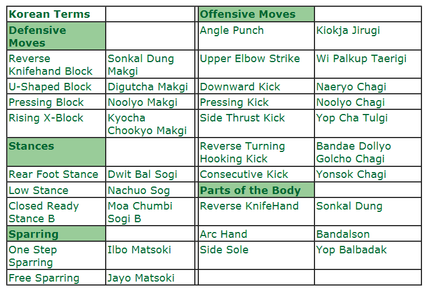 2.Meaning of Joong-Gun? – Joong-Gun is named after the patriot Ahn Joong-Gun who assassinated Hiro-Bumi Ito, the first Japanese governor general of Korea , known as the man who played the leading role in the Korea-Japan merger. The 32 movements in this pattern represent Mr. Ahn’s age when he was executed in Lui-Shung prison in 1910.

3.What is the Korean for U-shape block and its purpose? – Digutcha Makgi – To block a pole or staff with the Arc hand of both hands

4.What other name is given to U-shape block. Both English & Korean? – Pole block – montong makgi

5.What is the Korean for Twin upset punch? – Sang Dwijibo Jirugi

6.What is the Korean for Rear foot stance & explain it? – Dwitbal Sogi

7.What is the Korean for Low stance & explain it? – Nachuo Sogi

8.What is the release move in Joong-Gun & explain it? – Japkgi (grasp), Japyasol tay (release)

15.What is the ready position in Joong-Gun. Both in Korean & English? – Closed ready stance “B” – Moa jumbi sogi “B” (Hands 15cm from the Navel)

16.Why do we perform 1-step sparring? – To practice and learn distance, timing and correct target areas

21.What does the colour red signify? – Red signifies danger, cautioning the student to exercise control, whilst warning the opponent to stay away.

23.One question from previous Gradings! – Remember and know your previous Theory