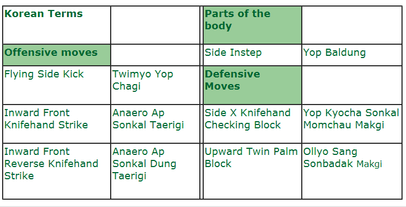 Essay (subject of which is given prior to the grading)

All patterns up to grade

2.Meaning of Choong-Moo? – Choong-Moo was the name given to the great Admiral Yi Sun Sin of the Yi Dynasty. He was reputed to have invented the first armoured battleship (Kobukson) in 1592, which was the precursor of the present day submarine. The reason that this pattern ends with a left hand attack is to symbolize his regrettable death, having no chance to show his unrestrained potentiality checked by the forced reservation of his loyalty to the king.

3.What is the purpose of the 360 jump and spin into Knifehand guarding block in Choong-Moo?- To avoid a sweep or low attack and to disorientate the opponent.

6.What is the Korean for flying side kick? – Twimyo Yop Chagi

7.What is the Korean for sliding & explain it? – Mikulgi – It is an effective technique for covering a long distance in one smooth

8.Which 3 patterns have release moves. Demo & explain the difference between them? – Do-san, Joong-Gun and Hwa-Rang.

16.Name the 4 parts of your forearm. Both in English and Korean? – Bakat (outer) An (inner) Dung (back) Mit Palmok (forearm belly)

19.What is Twisting kick in Korean & what part of the foot is used. Also what section for what height kick? – Bituro Chagi – Ball of the foot (Apkumchi). Low kick to the front, Middle kick to the 45 degree line and High kick over your shoulder to the side & behind you.

21.What does the colour Black signify, What is meant by impervious to darkness & fear? – Black is the opposite of white, therefore signifying maturity and proficiency in Taekwon-Do. It also indicates the wearer’s imperviousness to darkness and fear.

22.What is the Korean for Vertical stance & explain it? – Soojik Sogi – body weight 60/40, rear leg is primary as most weight is on it, both feet pointed 15 degrees inward, length of 1 shoulder width between big toes.

23.How have you supported your club and organization? – Think of all the things you have done over the years.

24.Why do we do free sparring and 2 on 1 sparring? – To learn how to block, evade and counter against more than one attacker.

25.What is the difference between ITF & WTF Taekwon-do? – ITF is the Traditional Taekwon-Do based on the teachings of General Choi Hong Hi 9th Dan, the founder of Taekwon-Do. In sparring ITF TKD allows punching to the head. The Olympic style of WTF TKD is a sport that shares the name (although written differently). During Olympic WTF TKD competitions no punching to the head is allowed. WTF TKD do perform Patterns (poomse) but these are not based on the original 24 patterns designed by the founder of Taekwon-Do, Gen Choi Hong Hi. As WTF TKD is a sport the onus is on beating someone, that someone being an opponent, the original International Taekwon-Do Federations (ITF) Taekwon-Do is based on self development and improvement of one’s self.

26.Who’s your greatest inspiration in Taekwon-do? – Your Answer!

27.Why did you start Taekwon-Do? – Your Answer!

28.What is your greatest moment in Taekwon-Do? – Your Answer!

29.If you had to pick a 6th tenet of Taekwon-Do what would it be and why? – Your Answer!

30.What is the difference between a martial artist & a sports person? – Your Answer!

.Any amount of questions from previous Gradings! – Remember and know your previous Theory questions