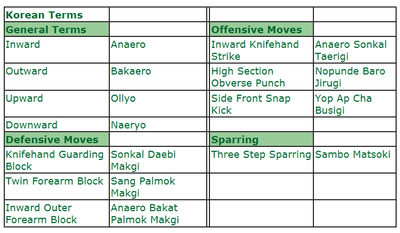 White signifies innocence, as that of the beginning student who has no previous knowledge of Taekwon-do.

Yellow signifies earth, from which a plant sprouts and takes root, as TaeKwon-Do foundation is being laid.

2.What is the meaning of Dan-Gun? – Dan-Gun is named after the holy Dan Gun, the legendary founder of Korea in the year of 2333 B.C.

4.How do you form twin forearm block and what’s the Korean name? – Sang Palmok Makgi

8.What part of the foot is used in front snap, side piercing & turning kick – Ball of the foot – Ap kumchi & Foot sword – Balkal

9.What body position should you be, in L-stance? – Half facing only

11.What is the Korean for 3 step sparring? – Sambo Matsoki

13.Is Twin forearm block performed half, side or full facing? – Half Facing

16.What does the colour Green signify? – Green signifies the plant’s growth as Taekwon-Do skills begin to develop

18.What is the Korean for inward and outward? – Anaero (inward) Bakaero (outward)